Club Couture has released their newest summer collection, Flair 2013 with pieces inspired by the vintage looks from the 50’s and 60’s. The beautiful collection includes different summer dresses and accessories at affordable prices. 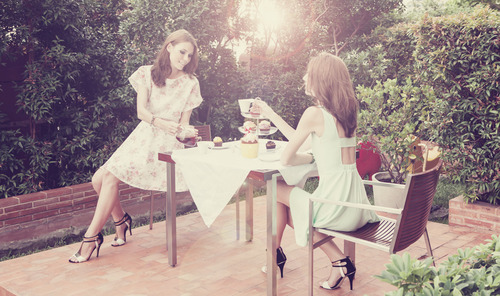 Club Couture provide contemporary ladies wear, with an edgy twist giving the brand their own unique style and it’s definitely come through in the newest collection. Going with this seasons trends the brand went with vintage style dresses, but have added their own modern twist to the collection, bringing a fresh new look for the summer.

To promote the new collection, Club Couture went with the garden tea party theme for Flair, which fit absolutely perfectly. The photography for the lookbook had the perfect vintage feel to it bringing the collection to life, and cor did those cupcakes look good! All the dresses and accessories can be found on the brands website www.clubcouture.cc, where you can also check out their own blog to keep up to date with tips and news.

The Duchess of Cambridge, Kate Middleton may well be married to a Prince but that doesn't stop her from bargain hunting and sporting high street brands like the rest of us. This is why the nation loves her, because although she may be wearing designer clothes for the royal engagements, she isn't afraid to be seen in high street brands too. Lovely Kate!

Over the weekend Kate was seen wearing an elasticated knee-length, navy blue tunic from the maternity range on ASOS. So not just high street, Kate is an online shopper too. The Duchess bought the dress from the online retailers for just £17.50 which was reduced from £25. Kate wore a cropped purple cardi over her dress with nude sling back wedges. As well as ASOS, Kate Middleton was seen sporting a black and white polka dot dress from Topshop under her black blazer from Zara whilst on the hunt for more maternity wear from the Oxford Street branch of Topshop.

Not only is Kate looking fabulous during her pregnancy, but other sources have stated that the Duchess and wife to Prince William, has been indulging in the domestic life and getting cooking classes from the couples housekeeper learning “a number of new dishes.” How sweet.

After three months of saying they won’t move to online sales, they gave in. A recent collaboration between online shopping site ASOS and Primark has happened!

A limited trial of 20 womenswear pieces will be available from the online retailer, ranging from casual to formal wear. After so long, bargain hunters have been waiting for Primark to go online, and today is the day where dreams come true. A spokesperson from ASOS told the Guardian the launch would give the store “some insight into online retailing”, after the trouble with the whole project going forward in the first place.

There was dismissal of the project even starting when the chief executive of Primark’s parent company, George Weston stated back in April “It is enough for us to have great fashion in good locations at the right price. That simply works for us. We don’t have a problem that needs fixing.” He then more recently said that customers would rather “keep toddling down Oxford Street.”

But we will see, wont we. Let me know what you think of this collaboration. Good idea or not?
Posted by Bonita at 06:35 No comments:

To mark the opening of the Metropolitan Museum of Art’s Punk: Chaos to Couture exhibit, Moda Operandi will be celebrating with 13 other labels to create a limited edition punk inspired collection. As a sponsor of the exhibition, the online boutique will be working with leading labels such as: Dolce & Gabbana, Vivienne Westwood, Moschino, Givenchy and many more.

Each label created an exclusive piece, varying from two corseted tartan dresses by Vivienne Westwood, to a chiffon and leather cape by Givenchy. Lauren Santo Domingo co-founder of Moda Operandi says ‘we are thrilled to offer women the opportunity to capture the spirit of punk with pieces that balance high fashion and rebellion.’

James Franco teamed up with Christina Voros, who worked on ‘127 Hours’ with Franco, to create a documentary delving into the fashion world, taking us into the mind of Gucci ‘s fashion director, Frida Giannini. A trailer was released for the documentary, named The Director, and has been premiered at the Tribeca film festival.

The film takes us behind the scenes of Italian fashion house headquarters. They give the audience an insight to how Giannini gets her inspiration for everything including the design and model casting processes.

Franco was previously the face of one of Gucci’s fragrances so was already familiar working with Giannini who is normally very private. She said ‘I was a little intimidated at the outset,’ adding ‘It is difficult coming to terms with multiple cameras following you everywhere…However having known James for a number of years now, there is good chemistry between us and I also have great respect for him and his multi-faceted talents.’

Check out the trailer here, and see what you think…

Margaret Thatcher, Former Conservative Prime Minister passed away yesterday morning after a stroke, whilst staying at The Ritz hotel.

Thatcher was the first female British Prime Minister, serving for 11 years, from 1979 until 1990. Most would agree the policies she carried out whilst PM, caused massive amounts of controversy across the country, from crushing the trade unions and causing the miners’ strike.

However another thing that is just as famous as her politics is her image. There are five ‘elements’ that make up the ‘Iron Lady’s’ style: her hair, her pearls, the blue suit, the pussybow blouse and her handbag and gloves. For her first day as Prime Minister she was dressed head to toe in Tory blue demonstrating in the most obvious was that the Tory’s were back.

"I really only dress in two kinds of ways. One, the way I am dressed now, in a classic suit and blouse. It's terribly important to have good blouses…” Lady Thatcher’s power-dressing is just as well known as the woman herself. The very last thing she set out to be was a fashion genre, but since 20 years ago when she led our country, ‘Thatcher style has become a staple of the catwalks.’ With Georgia Jagger dressed as Lady Thatcher for U.S Harper’s Bazaar.

Many will remember her as ‘Thatcher the milk snatcher’,but she was also a woman who showed that you can be authoritative without giving up your femininity. But as Alexandra Shulman stated ‘Even those who disagreed with her politics will remember her as a shrewd, influential visionary.’
Posted by Bonita at 15:04 No comments:

David Bowie Is All Yours: Pop-up Boutique in Selfridges

David Bowie seems to be everywhere since the release of his newest album. He is a British icon and seeing as it’s been 10 years since he's last released an album it’s no wonder people are all over him.

His latest exhibition David Bowie Is has been a massive success. With tickets practically sold out on all weekdays, he isn’t doing too badly.
But not only is there an exhibition, London’s Selfridges have teamed up with the V&A museum to open up a pop-up boutique named David Bowie Is All Yours, in the store. On sale will be products that celebrate the "legendary musician."

The V&A are said to be contributing exclusive products that would only be available at the museum gift shop such as t-shirts, books and prints.  The store will also offer limited edition photography by Brian Duffy and albums chosen by the Vinyl Factory. To top it all off Selfridges will be teaming up with Illamasqua offering shoppers makeovers and master classes with bright bold make-up.

The boutique will be situated in the Selfridges Concept Store and opens on April 4th.

2013 is a big year for Beyoncé, she is already touring around the world for her Mrs Carter concert and headline at V-festival, but the new mum and world famous singer will also be headlining at a global concert in London, Twickenham.

Gucci’s international campaign Chime for Change, who’s aim is to raise funds and awareness for girls’ and women’s empowerment, have organised a concert to be broadcast worldwide on June 1st. Big names such as Florence and the Machine, Ellie Goulding and Rita Ora will also be performing at the event.

But not only is Beyoncé headlining, she is also one of the co-founders of Chime for Change and concert artist director. She said their goal is “to call for change for girls and women in the loudest voice possible” also adding “I am excited for us to come together on June 1st to bring the issues of education, health and justice for girls and women to the world stage.”

Gucci have announced that they will be providing financial assistance to put on the show, meaning all ticket sales will go straight to the charities aiming to provide better education, justice and health for women everywhere.